An innovative, holistic approach to measuring how well a school supports student achievement is being closely watched as a possible model for complying with new reporting requirements in the federal Every Student Succeeds Act (ESSA). Known as the School Quality Improvement Index (SQII), it is comprised of an array of metrics related to social -emotional and culture-climate factors as well as academics.

The SQII includes 10 nonacademic metrics such as chronic absence, academic preparedness, social-emotional skills, the culture and climate of a school, and steps to support effective instruction. The scores can flag students who are struggling and trigger personalized intervention strategies. And like measures of academic achievement, the nonacademic indicators in SQII can be measured and progress tracked. 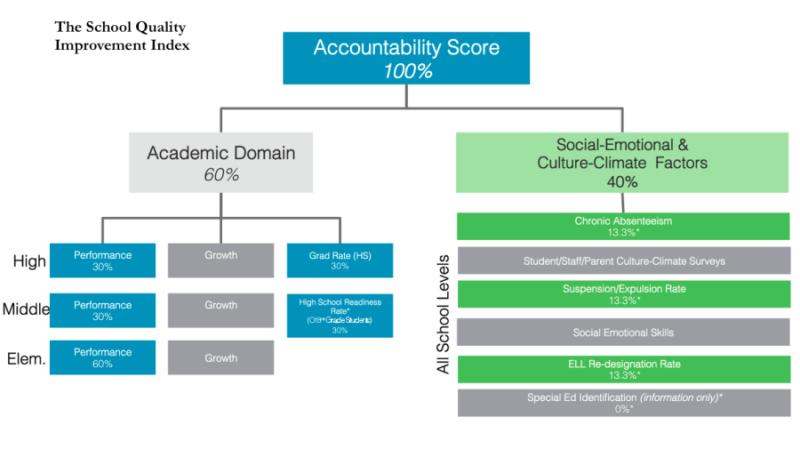 The SQII scores provide metrics that allow schools and districts to dive deep into a school’s programming to find out where and why a school’s performance is weak and where it is strong. It shines a light on a school’s strengths and weaknesses by showing the school’s chronic absence rate, the percentage of English learners proficient in English, or how well a school has prepared 8th graders for high school by tracking student attendance rates and GPA. The reports look at student subgroups for every measure as well as the change over time, including for chronic absence.

The results for the 2014-2105 school year, published online, reflect scores from California districts that are part of CORE, a nonprofit that is focused on improving student achievement by fostering highly-productive, meaningful collaboration between its nine member school districts: Fresno, Garden Grove, Long Beach, Los Angeles, Oakland, Sacramento, San Francisco, Sanger and Santa Ana Unified. The CORE districts have been shaping SQII for several years as a mechanism for measuring school quality and supporting continuous improvement as part of a waiver from the federal No Child Left Behind requirements.

Schools participating in SQII receive a composite SQII performance score from 0 – 100 that still reflects academic performance based on the most recent tests on the Common Core math and English language arts standards. Overall, a school’s SQII score is 60 percent academic, with 40 percent reflecting chronic absence, school climate and other social-emotional and culture-climate metrics. The chronic absence metric scores a student as chronically absent with an attendance rate of 90 percent or less. The number of chronically absent students is then aggregated to the school level.

The results show a general correlation between schools that had high academic achievement and schools with high scores for school culture-climate/social-emotional factors. Within those successes, there were some surprises such as a school that did better than expected or another that had strong academic scores but lower scores on other metrics.

The SQII reports and analyses are a means to an end for the districts, because they allow schools with similar demographics to learn from each other about programs that are working to support the children’s achievements, said Rick Miller, executive director of CORE districts. Other districts in the state have asked to learn more about SQII, and several are expected to begin participating in the CORE Data Collaborative in the next school year.

Go to the source to get more information about the CORE collaboration.

Educators and policymakers throughout the country are eyeing the SQII to inform their efforts to comply with new reporting requirements for measures such as chronic absence under the ESSA. “Unquestionably this would work within the new school climate reporting requirements of ESSA,” Miller said. “We hope states will take a look at what we are doing and learning, and consider what might be worth adopting for their state.”

*There are nine CORE school districts that participate in the collaboration and peer learning, but just six of the CORE districts participated in the SQII for the 2014-2015 school year results.