Sending home truancy notifications that are written using simpler language and fewer words can improve their effectiveness and reduce student absences by as much as 40 percent, a new study shows. Moreover, these changes are easy to implement and are virtually cost-free if truancy notifications are already being sent home.

Many states require, or at least advise, districts and schools to notify families when a student is considered truant (i.e. the student has too many unexcused absences according to the laws of that state.) Yet many truancy letters include long passages full of legal jargon that are confusing and feel threatening to families. For example, the first line of one state’s recommended truancy notice states, “[State XYZ] Education Code [XYZ] provides that a pupil (child) subject to compulsory full-time education or to compulsory continuation education who is absent…” These notifications frequently use a tone that blames families and emphasizes the legal consequences of continued unexcused absences.

To improve standard truancy letters, a team of researchers from Attendance Works, Harvard and UC Berkeley used behavioral science insights to design and test the efficacy of rewritten truancy notifications that provide families with clear, actionable information to help them feel empowered by, rather than threatened by, their school districts.

The team randomly assigned over 130,000 families to receive either the standard or modified versions after their students had accumulated three absences or tardies. The team then examined the number of partial and full day absences those students had over the following month.

The most successful modified truancy notifications used statements that conveyed that guardians had the power to help their students get to school and explained how even a few absences can have a serious negative effect on students (Download examples of the standard and modified letters below.) These most effective letters reduced absences in the following month by 2 percent, translating to .07 fewer days of absence, equal to a 40 percent improvement over the estimated effectiveness of the standard truancy notification.

“Simplifying communications to families can be a simple yet powerful tool for behavior change. Presenting information that is clear, easy to understand, and usable makes it much more likely that guardians will act,” said researcher Lasky-Fink.

Other research on family engagement further illustrates the power of simplification. One study published in April 2019 examined how to increase family enrollment in a program that sends timely, actionable SMS messages produced and sent directly from a digital gradebook without additional teacher effort.

Notices of truancy are a common form of school-to-family communication. They tend to be written in a way that doesn’t result in the greatest impact on reducing truancy, the authors write. Applying insights from behavioral science, such as the simplification of language and supplying the right information in an empowering way, can have a meaningful impact on students and families, the authors conclude. 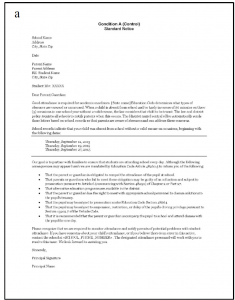 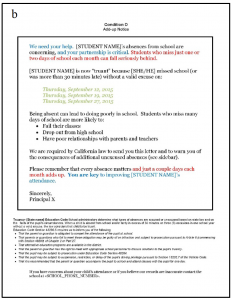