Students form habits – including good school attendance – at an early age. So it was particularly disconcerting for the central Connecticut town of Vernon to discover that 16 percent of its kindergartners were chronically absent.

“The real killer was kindergarten attendance,” says Dr. Mary Conway, superintendent of the Vernon Public Schools, which began monitoring chronic absence through its involvement with the Campaign for Grade-Level Reading. “Parents just didn’t see it as an important thing in their child’s life. But we knew it had an incredible effect on learning.”

Also troubling were data showing that many chronically absent students “were living in poverty, minorities, especially our Latino population, and children of parents who didn’t find success in school themselves. So we were continuing that cycle.”

In response, the school district developed a plan not only to improve kindergarten or elementary school attendance but attendance at all seven of its schools, serving 3,500 students.

“We have to be a system,” explains Conway. “Children graduate not only from our high school but from the public schools. So our principals work together and they know that their student achievement is influenced very heavily by their student attendance.”

The results of this “comprehensive systemic” plan, to date, are encouraging. During the three school years between 2010 and 2013, chronic absence – defined as missing 10 percent or more of school days for any reason – for elementary school students (grades K-5) dipped from 9 to 5 percent.

For kindergarten, it fell from a high of 18 percent in 2010-11 to 13 percent in 2011-12. This improvement also may have been influenced by a switch from half-day to full-day program, heightening kindergarten’s importance for some parents.

While the rate for middle school students dropped from 11 to 6 percent, the high school rate remained at 15 percent – a disappointment, says Conway, showing not only that “old habits die very hard” but confirming the importance of engraining good attendance habits in the youngest students.

Vernon’s work has been aided by strategies and support from Attendance Works which was made available through capacity building funding from the William Caspar Graustein Memorial Fund. Funding was boosted by grants from Connecticut’s Consortium on School Attendance and Connecticut’s Juvenile Justice Advisory Committee.

The plan’s key elements include:

Shrewd data collection, analysis and use.

Vernon Public Schools looks at both average daily attendance, as well as chronic absence. Every month, the district generates an ADA report by school and breaks out the ADA by grade level. The goal is 95% ADA for every school and every grade and the superintendent celebrates when schools achieve that goal. In addition, knowing that ADA alone can paint an unwarranted rosy picture and mask individual students who repeatedly miss school, school-based teams also monitor chronic absence reports every week to identify individual students who are chronically absent and follow up with them.

Vernon uses a case management approach developed by the district to comply with a new state attendance law. After three absences, excused or unexcused, a letter is sent to a student’s home. After six absences, a phone call conference is scheduled with a youth counselor. After nine absences, parents are asked to attend a meeting at school. For each student, a spread sheet is used to chart actions taken.

Coordination with other community partners.

Vernon’s Youth Services Bureau, run by the town, provides one staff member to work with students who have attendance issues at the elementary schools. A district employee works with the other schools. As needed, these counselors individualize the intervention, such as making home visits or referrals to other services. Another Youth Services Bureau counselor works with high school students on attendance and other issues, and is a member of the school-based attendance team monitoring data weekly.

An “Intervention Pyramid” outlines a four-tiered response to attendance issues. A monthly “heat map” highlights in bright yellow each grade in each school that has achieved average daily attendance goal of 95 percent. 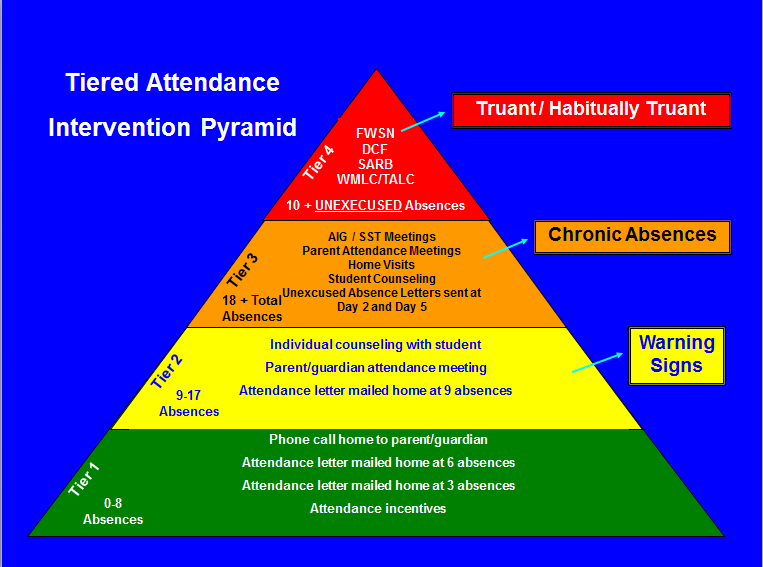 Heightened awareness throughout the school district.

The call and work to improve attendance comes from many quarters – from the superintendent, school board, school governance teams and each school’s improvement plan.

“Everybody in School Every Day”’ signs adorn the lawn of the Superintendent, school board members and other residents. At a community gathering, the school district sponsored a booth dedicated to attendance, distributing calendars to all and alarm clocks to students identified with attendance issues. The “heat map” and other attendance data are shared with the public.

Along the way there have been challenges, such as getting the necessary data. “Our student management system – which is now being replaced – was not exceptionally comprehensive and it was difficult to extract data from it, but we were insistent,” says Conway, adding that the process of generating reports improved with time.

With older students in particular, truancy – meaning students who land in truancy court due to many unexcused absences – also remains a challenge because “sometimes parents don’t even know that their child is absent so the work there is more with the individual student” rather than with the parents, says Conway. Generally younger students with unexcused absences stay home with their parent’s knowledge, so involving parents is a key part of the solution.

What has proved most important, emphasizes Conway, is a community-wide response. “It’s important to get everyone on the same page, to call together people from each school and have that discussion, to do things in the same manner, to have the same language and procedures at each level so parents know that,” says Conway.

This also means schools developing an attendance plan as a team – doing it “with them” rather than “to them,” says Conway. It means teachers following up to let absent students know they were missed. It means counselors personally connecting with families with free school breakfasts when needed. It means active, engaged parents.

While there is more work ahead, Conway is cheered by results to date, especially at the elementary school level. “It really is making a difference and this is where those habits start,” she says.