"Every single day, every single minute counts.” Principal Nima Tahai constantly stresses the importance of attendance for staying on track in school to students, parents and staff at Garfield Elementary School.

By reinforcing positive messages about attendance, contacting families when student absences first start adding up and providing intensive case management services to families facing serious health and economic challenges, Tahai and the staff at Garfield have cut chronic absence rates in half.

By the end of the 2013-14 school year, the chronic absence rate at Garfield was 7 percent, well below the district average. Over time, Garfield has developed a three-tiered approach that has aligned data, systems and programs to promote good attendance for all students. But very little of this was in place eight years ago. “When we began the work,” recalls Jamie Lopez, Managing Director of East Bay Asian Youth Center, “it was all case management.” 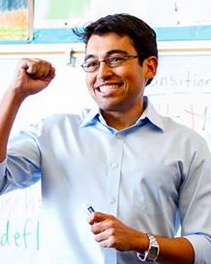 When the district began providing more regular data reports to schools on chronic absence that showed the different levels of absenteeism for students, Lopez says they were able to understand the challenges in a more comprehensive way instead of solely focusing on the students and families with the most severe needs.

With advice from Attendance Works Director Hedy Chang, Lopez and the two family liaisons who staff Garfield’s Family Resource Center were able to craft different levels of responses to students based on how many school days they had missed. They began working with the school’s attendance clerk to reach out with students at risk for chronic absence but not yet missing 10 percent of the school year. This opened up a second tier of interventions.

When Nima Tahai took over as principal in 2010-11, Lopez and the family liaisons had built positive relationships with many of the teachers. It made his job as a principal much easier. Tahai then built on that foundation and worked to shift the culture, which was one that blamed parents and students for absences.

What did Tahai do to create a culture of attendance? With the staff, he looked for an early win that did not require the entire staff to cooperate. Tahai decided to recognize students every trimester for perfect attendance rather than once a year. He suggested, “Why don’t we put up all the pictures of kids with perfect attendance every trimester?” While it was nice for the kids and parents, it began to change staff attitudes.

Tahai also talked about attendance at every staff meeting. “My role is messaging constantly. But talking isn’t enough.” Tahai also made strategic use of data, with support from the district office, which provided chronic absence data by classroom. “When teachers could see the list of students by name and hear what the attendance team has done in each case, it shifted their attitudes,” he says.

He told his staff, “Let’s look at kindergarten. That’s ridiculous how high chronic absence is—15 percent. Let’s do something.” The teachers and attendance team began to focus on kindergarten attendance and encouraged families through special events and weekly recognition for perfect attendance. By the end of 2012-13, the intensive focus paid off. Garfield’s kindergarten chronic absence rate was cut in half to 7 percent.

With parents, Tahai worked closely with the attendance clerk to emphasize the importance of attendance. “We weren’t as firm as we needed to be,” he noted. “Now we say, ‘We don’t do things like take extra days off for the holidays here. Your child needs to be here. There may be a million reasons why you can’t be here but we’re not even going to go there. We can help.’”

The blend of support, caring and clear messaging about attendance as a key to students’ long-term success is paying off. “Our attendance has improved every time we’ve had one of those conversations,” says Tahai.

The numbers back him up. Through a combination of positive messaging, incentives, early outreach and case management, Garfield went from an overall chronic absence rate of 12 percent in 2010-11 to 7 percent in 2013-14.