Let Teens Sleep in the Morning to Improve Attendance

It’s a true story in many families: the elementary child who happily agrees to turn out the lights at 8:00 pm gets to bed at 11:00 pm or later by middle and high school. Why is that so many teenagers stay up late and have trouble getting to school on time? Start School Later, a national nonprofit, believes the key to ensuring students get enough sleep so they can attend school every day−and stay healthy and safe−is to focus on when the morning school bell rings. 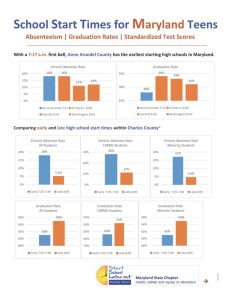 Since the 1970s and 80s, middle and high schools shifted their start times to begin classes earlier than elementary schools. Today the average morning bell time for middle and high schools is 8:03 am, and many start as early as 7:00 am. This leaves many students, and especially those who have to travel an hour or more to reach campus, bleary eyed when they rise from bed at 6:30-7:00 am to get to school on time.

Beyond making it challenging to get to school every day, teens who don’t get enough sleep are set up to be at risk for a variety of health issues including obesity, diabetes, depression and anxiety. And research shows that drowsy students who lack adequate sleep are more often chronically absent and tardy at school, and are in more automobile crashes.

Are teens just being willful, as some might believe? Studies also show that as children mature their sleep and wake patterns shift to later hours. With this in mind, the American Academy of Pediatrics (AAP) in 2014 issued a brief urging high schools and middle schools to aim for start times that allow students the chance to get an optimal 8.5–9.5 hours of sleep a night.

As a mother of three, Terra Ziporyn Snider says she “lived and breathed this issue on both a personal and professional front for years” as she worked to change the 7:17 a.m. high school start times in her school system. The local school board was not able to make the change. She and Maribel Cabrera Ibrahim realized that a multifaceted approach was the only one that was going to work. The two women teamed up and created Start School Later.

Moving school start times affects a community’s entire day, from start times for after school activities or student jobs, to when parents get to work in the morning. The biggest hurdle in most communities is related to school bus routes. Most districts have a limited number of buses, which are shared among the entire student population.

Yet a shift in school start times has been picking up steam. Already districts in 44 states have moved to later start times for middle and high school students. The results have been swift: When schools have delayed the start of the school day, communities have seen reduced tardiness, as well as improved attendance, graduation rates and standardized test scores, studies show.

The call for a later school start time for teens is supported by a number of health organizations. In addition to AAP, the American Medical Association, the Centers for Disease Control and Prevention, and a host of other national and regional groups support later morning school start times for teens.

Find out more at the Start School Later website: http://www.startschoollater.net