Fighting Chronic Absenteeism: Instead of Find and Punish, Let’s Map and Heal

We partnered with America’s Promise Alliance President John Gomperts on this commentary piece, which was first published on Medium.
The problem starts early.

Chronic absenteeism affects at least 10 percent of kindergartners and first graders every year. It leads to lower test scores and lower grades. If it continues through middle school, it’s likely the student won’t last through high school. By the time freshman year rolls around, it becomes a better dropout indicator than test scores.

In fact, in Utah, students who missed 10 percent of the school year in any year starting in eighth grade were more than seven times more likely than their regularly attending peers to leave high school without graduating.

So what causes chronic absenteeism? If you guessed students skipping school, that’s only part of the story. A new study finds that illness, often tied to or exacerbated by poverty, is a big problem, especially in the early grades. It’s asthma and dental problems, learning disabilities, and mental health issues related to trauma and community violence that contribute to chronic absenteeism. 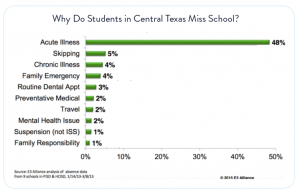 The report from Attendance Works and the Healthy Schools Campaign, Mapping the Early Attendance Gap: Charting a Course for School Success, finds that students from low-income families and communities of color are more likely to miss too much school. So are students with disabilities. These attendance gaps start as early as preschool and kindergarten and soon turn into achievement gaps.

One national study estimates that 5 million to 7.5 million students miss as much as an entire month in the academic year.

It comes as no surprise that these students are also the least likely to graduate from high school. This past spring’s Building a Grad Nation report found that, while national on-time graduation rates are up as a whole, students from low-income families, students of color and students of disabilities are still behind.

But first, we need to have a better understanding of the scope and scale of the problem itself. That means mapping our attendance gaps, and analyzing the data to determine who is missing school, when they’re most likely to be absent, where the problem is most severe and why it’s happening.

Once we understand the causes, the solutions become clear. One example: When a central Texas analysis found that the number one reason kids were missing school was because of acute illness, officials began an aggressive campaign to offer the flu vaccine at school. The E3 Alliance, a cradle-to-career partnership, expects to deliver more than 26,000 free vaccines this fall.

And second, we need to think outside the classroom to improve attendance inside it. This means educators partnering with families, local government, nonprofits and public health networks.

And in Springfield, Massachusetts, activists came up with a way to counter concerns about safety, while boosting attendance and fitness. Every morning, dozens of elementary school students wait for the “Walking School Bus.”

Led by teachers and parents, the walk provides a safe and healthy way for kids to get to school. One student who was tardy or absent for 22 days in the prior school year wasn’t late or absent once after joining the program.

This year, more than 4 million young people are starting their freshman year of high school. To help them make it to the end of senior year, schools and communities must work together to reduce rates of chronic absenteeism.

It’s time to move away from the standard system of find and punish, and instead find ways to work together to map and heal.

Attendance Works and Healthy Schools Campaign will be discussing their brief and talking with state leaders who have committed to reducing chronic absence during a webinar at 2 p.m. ET on Sept. 9. Register here.

Looking forward to seeing you at today's webinar @NAESP at 2pm ET. Learn how principals & staff can engage students while families shelter at home. Everyone who registers will receive webinar recording link! https://t.co/1G9xqHKULS #KidsDeserveIt #SchoolEveryDay