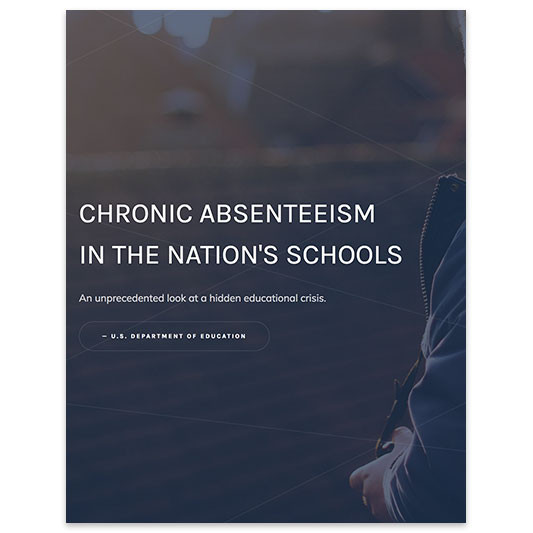 Civil Rights Data Collection (CRDC) for the 2013-14 School Year, U.S. Department of Education, Office for Civil Rights (OCR). For the first time, the CRDC collected student absenteeism rates from all public schools and school districts nationwide. The data show that 6.8 million* students, or 14 percent of all students, were chronically absent (meaning they missed 15 or more days) from schools in 2013-14.

Among high schools, three million students (18 percent) were chronically absent. Among elementary schools, chronic absence affected a greater number, 3.5 million students, but at a slightly lower rate (11 percent). Because the data is broken out by school level and not individual grades, the report could not validate the high levels of chronic absence that other state and local analyses have shown specifically for vulnerable students in kindergarten and 1st grade.

Students were chronically absent in every state, and nearly 500 school districts reported that 30 percent or more of their students missed at least three weeks of school. Disaggregated by race, gender, disability status and English language proficiency, the results show that some populations experience significantly higher rates of chronic absenteeism.

The CRDC collects information from schools on a variety of measures such as student access to courses, staff and resources and school climate measures that impact education equity and opportunity for students. This is the first time CRDC obtained data on missing 15 days for any reason including excused and unexcused reasons. This definition of chronic absence is similar to the metric recommended by Attendance Works, missing 10 percent of the school year.

The full CRDC data may be downloaded now. Visit crdc.ed.gov for links and more information. DOE released additional data highlights in 2016 on key topics such as chronic absence, student discipline, and early learning access. The public can also look up 2013-14 CRDC data for individual schools, school districts, and states.

*UPDATE (as of October 28, 2016): The state of Florida, on behalf of its school districts, corrected data it previously submitted to the 2013-2014 Civil Rights Data Collection. Those data are now incorporated in the CRDC public-use data files and summary documents. The New York City Department of Education acknowledged anomalies in its chronic student absenteeism data that may affect the numbers reported in these documents.

Attendance Works has created a guide for accessing the 2013-14 CRDC to help filter the data for your state or LEA.

The chronic absence data was released prior to the opening of the Every Student Every Day National Conference: Eliminating Chronic Absenteeism by Implementing and Strengthening Cross-Sector Systems of Support for All Students, held in Arlington, Va. Sponsored by the Education Department, the first-ever national conference on chronic absence attracted teams from more than 35 states as well as the 30 school districts that are participating in the My Brother’s Keeper Success Mentor initiative.

DOE’s Press Release with links to resources related to the ESED national conference.

Here are sample tweets to spread the word about the CRDC’s chronic absence data for 2013-14:

Join us on Jan. 25 at 2:00pm ET for the next #PathwaystoAdultSuccess Solutions Forum: Engineering Student Success in Pandemic-Impacted Times. Register: https://www.eventbrite.com/e/engineering-student-success-in-pandemic-impacted-times-tickets-250240635477