Concentric Educational Solutions (Concentric) develops and supports school infrastructure to improve school climate as well as student attendance and academic achievement. Founded in 2010 by David Heiber, the company is centered around a theory of “concentricity,” or putting students at the center of school. Concentrics’s work includes a home visiting framework, restorative practices and support for school-wide attendance teams.

AW: David, tell us, what is Concentric and how did it get started?

David: I studied African American Studies at Temple University with Molefi Keti Asante, who is considered the founder of Afrocentricity, the theory of placing Africans and African Americans at the center of social phenomena. While I was teaching, I saw that many of the things occurring in schools were not about the students. Schools were about adults, business and bureaucracy. Through my conversations with Dr. Asante, I developed my thesis on concentricity.

Later, as director of student services at a charter management organization in Washington, D.C., we were, quite frankly, not getting much better results than traditional public schools. So I brought together the student support team, and we just started asking questions, such as "How can we design schools differently? How can we design supports differently?" It was through these conversations that we began to implement putting students at the center of everything that we do. We developed a home visit framework, and from 2010 to 2012 we piloted this approach in four schools in D.C. The result was we drastically reduced the suspensions and drastically increased attendance, particularly for the most vulnerable populations.

We were one of the very first African American companies to get a startup grant from New Schools Venture Fund in 2010. But that was 10 years ago, and now we are in over 200 schools, in nine different states, and the work continues.

AW: Can you describe your approach ?

David: We're concerned with organizational readiness and needs assessment. We need to know when we engage with a school, what the school needs. When concentric started, we taught a framework of home visits as a school turnaround model. But schools were very reluctant. Now attendance and chronic absenteeism is a main pain point at schools. So, we can utilize our home visit framework to find out the reasons why students don't come to school, and we capture that information and provide it to the schools so that they can make data-driven decisions.

AW: Do you have examples of the schools and or districts you are working with, where attendance or chronic absence levels changed?

Michael: I'll start with Baltimore City. We were seeking to increase or improve academic performance, attendance and the social emotional experiences of students. We worked with five middle schools and 200 students, whose attendance was at Tier 2 and 3, and they failed one or more core classes the previous academic year. We provided in school and out-of-school support to students, including daily individual check-ins and SEL-based groups, where we focus on two competencies: self-management and self-awareness. Each school had two professional student advocates: one social worker and one acting as a mentor. When a student was absent, we went out that day to find out what was going on. We sought out additional support from the family so that we could bring that student back to the school.

Our work was from March of 2019 through March of 2020. Academically, our outcomes were pretty good. About 43% of our students passed all of their classes, and about 40% improved their attendance and moved into Tier 1.

AW: Can you describe any other initiatives where it's been a slightly different model, but you've also gotten results?

David: A less comprehensive engagement was at Digital Harbor High School in Baltimore City. This school saw a large jump in average daily attendance (ADA), by about 8.3%, and a 4% reduction in chronic absenteeism. In this school, we concentrated on students with Tier 2 absences.

The school had a cross-functional team meeting every single Monday for about 90 minutes chaired by the principal. Each person on the team was responsible for a group of students, and had to speak specifically about the interventions and resources that those students needed. To me, the biggest factor for change was not necessarily the structure, because I've been a part of structures like that before. It was the intentionality of the principal (Principal Swinton) in making sure that this was a priority. That to me, was the tipping point.

AW: Could you give us an example of an issue that your team identified, that was discussed and addressed by the team?

David: One particular student had given birth, and she was behind academically. The student was adamant that her teacher was not inclusive when she was asking questions. Because she was disconnected from that one class she started disconnecting in all the classes. When we brought that information back to the group, Principal Swinton said, "Okay, who is taking ownership for this child right now?" Later that day the principal sought out that student and had a one-on-one conversation. That student came to school every day after that.

Another example of our work is at Ecorse Community High School, located on the outskirts of Detroit. The district subcontracted with us as an out-of-school provider to improve attendance. The high school has 285 students and was on the state list of poor performing schools. After we began working with the students, the school’s chronic absence rate went from 72.1% in 2018-19 to 26% in 2019-20.

We created the structure that I described in Digital Harbor High School, and we were allowed to hold school staff accountable to make sure that the students were getting resources they needed.

AW: How do you make sure that your staff are able to connect with the kids and families?

David: When hiring we look for people who can connect with others, and it's not just connect racially, it's about connecting to people who are experiencing challenges. I’ll share my experience. I was kicked out of five high schools, I went to prison, I lost my parents when I was in prison, I had to eat off the floor in prison, I had to get my high school GED in prison. I know what it's like not to have. But having challenges and difficulties has not stopped me from defining who I am. It's motivated me to do better. And so I don't look at students who are going through challenges or who are incarcerated, or families who are poor, or families who may be in homelessness from a deficit model. I look at it from the perspective of what I needed. I needed support. I needed an opportunity. And that is exactly what we have tried to do, to provide that.

AW: How do you make sure you're attending to equity and the racial and cultural consciousness is embedded?

Michael: Well, that goes immediately back to the needs assessment and an organizational readiness. Let's use an example. In Montgomery County, Maryland, we knew that we had a high population of Hispanic/Latinx students. When we go out, they're concerned about who's knocking on the door, right? The person that we had out there was a Spanish speaking professional student advocate.

AW: How have you all had to pivot, now that Covid-19 has impacted schools?

Michael: Covid-19 arrived right about when we identified that we needed to push the envelope on engagement with families. We had been collecting data using the Concentric app, that we had developed from scratch. Our first thought was: we need to check in and see how everybody's responding to this experience, what is distance learning going to be like for these homes for parents who may have lost their job, who may be living in unhealthy or unsafe conditions? We conducted wellness checks on students in the Baltimore City School District. We’ve done 11,000 checks where we also document challenges and assistance that students or families might need. We’re also doing wellness checks in a few school districts in Michigan. And we also shifted to contact-less home visits. 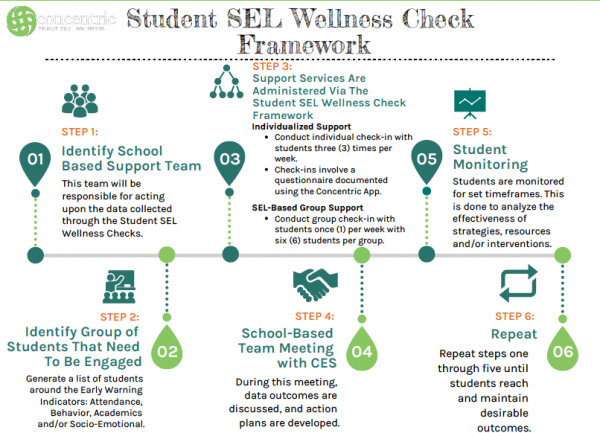 AW: Would you mind sharing the cost of your programs?

Michael: For our Home Visit Framework, we base our pricing structure per student, per visit or per school. This is all predicated on what the school or district needs.

David: We can think about it this way. If you incarcerate a minor, it's about $31,000 per year. So that's the associated overall public health costs, right? By all measures, and indicators, it's cheaper to educate a child than to incarcerate a child.

Great read via @washingtonpost: Schools are working harder than ever to find students during the pandemic. https://t.co/SFvLPHy7PV #SchoolEveryDay

Reply on TwitterRetweet on TwitterLike on Twitter1Twitter
Load More...