The state of Texas does not systemically monitor chronic absence or use it as an accountability metric. However, the state school funding formula factors in average daily attendance, a policy that means absenteeism can cost school district real dollars. Chronic absence analyses have been released in three of Texas’s largest cities.

The E-3 Alliance, a cradle-to-career initiative based in Austin, adopted improving school attendance as a key focus for school districts across Central Texas. The alliance emphasizes that attendance has a  “triple bottom line” affecting students, teachers, and school resources.

In 2011, the alliance launched Missing School Matters, a regional campaign including 14 school districts and more than three dozen business and community partners. Its goal is to increase average daily attendance by at least 2 percentage points, or an average of three school days per student each year. Since the campaign launched, the alliance estimates that the reduction in absences has saved Central Texas school districts $25 million attendance. 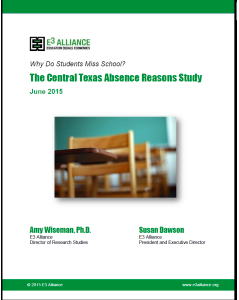 For the past two years, the campaign has delivered the largest in-school flu immunization campaign in Texas history. This year, 19,413 vaccines were administered in 136 elementary and middle schools at no cost to parents or school.

E3 Alliance’s immunization campaign underscores the strong connection between health and Its Central Texas Absence Reasons Study, a nationally ground-breaking study, showed that acute illness, including colds and flu, accounts for 48 percent of the region’s absences. The 2013 report also found:

The Barbara Bush Houston Literacy Foundation released When Students Miss School: The High Cost to Houston, providing a detailed look at the impact poor attendance has on student achievement, classroom instruction and district finances. The September 2015 report uses data from the Houston Independent School District from the 2014–2015 school year to identify the prevalence and impact of chronic absence. Findings include: 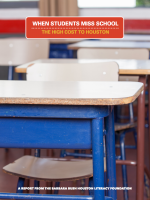 San Antonio Kids Attend to Win is an initiative focused on improving daily school attendance to ensure students are kindergarten ready, reading on grade level by third grade, graduate on time and are prepared to succeed in college and career. It is sponsored by the P16Plus Council of Greater Bexar County, a Strive Together cradle to career initiative. 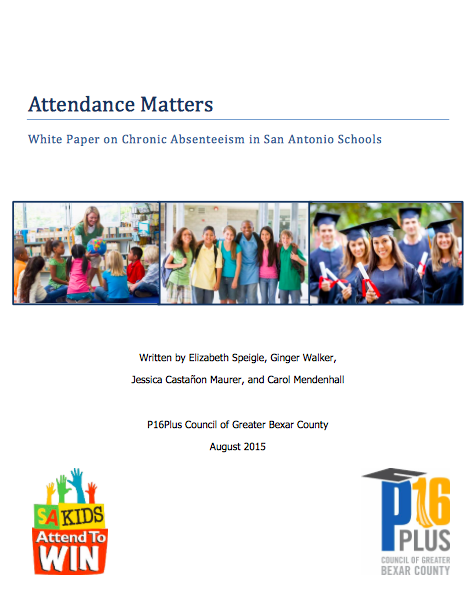 A study released in August 2015 revealed both the scope of chronic absence and the impact of interventions involving more than 5,000 students: