French Toast: An A+ Partnership In Perfect Attendance 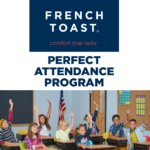 As America’s leading school wear brand, French Toast knows businesses have a lot to gain from supporting student attendance. In the long term, students who get to school every day on time will carry the habit into the workforce and will have learned the academic skills needed to thrive and compete in the workforce. In the short term, when young children miss school, parents are more likely to miss work.

French Toast’s commitment illustrates how a business can really make a difference in student’s lives, especially when it invests in attendance over time.

In 2014 French Toast piloted its Perfect Attendance Program (see this video) for elementary schools to provide incentive programs for attending school. The brand started small by adopting a 3rd grade class at Judy Hajek Elementary in Burleson, Texas. Students were offered free uniforms, school breakfast (including French Toast, of course!), and a college savings account for students with perfect attendance. At the end of the year, half (11 out of 22) of the students in the class had perfect attendance!

Shelly Vanover, the 3rd grade teacher at Hajek Elementary, found that the French Toast incentive program not only encouraged the children to be better students, it also allowed her to stick with her curriculum. “When the students are not here I have to pull them aside and get them caught up. But they are also missing out on what was there that day when they were not there. So, it is a lot of re-teaching and catching up,” Vanover says.

The 50 percent jump in attendance was remarkable, especially compared with the prior year, when just a few students in the school had perfect attendance at Hajek. And it was much greater than the brand had imagined.

“We were interested in seeing how the program could create a positive culture of attendance in a school, and the results were phenomenal,” says Matthew Buesing, Director of Marketing, LT Apparel Group. After success at Hajek, the uniform brand wanted to expand its support to more schools and classrooms.

French Toast reached out to Attendance Works in 2015 for help developing a more scalable program offering incentives and praising students for attendance.

This revised Perfect Attendance Program includes incentive and contest ideas to recognize perfect and improved attendance. Schools that fill out an application to participate receive posters and other signage to reinforce the importance of attending school every day. Each month French Toast sponsors a uniform drawing and rewards winners with a free uniform (two tops and one bottom).

Attendance Works also helped the brand decide what type of data to collect from the schools to track each student’s daily attendance. At the end of the academic year, French Toast provides an “A+ breakfast” to each school that successfully reported its attendance data throughout the year. The students love the breakfast, and their parent appreciate the new uniforms!
Three additional schools—one each in New York City, Grand Rapids, Michigan and Arkansas—joined the incentive program in 2015-16.

Buesing admits that supporting schools with an attendance incentive program can have some challenges. Strong teacher support is the missing puzzle piece. “If the teachers are involved the kids want to be involved,” Buesing says. French Toast’s attendance program has evolved so the approach shouldn’t be seen as a burden by teachers.

The brand remains committed to supporting strong attendance in schools. “When we approached Attendance Works in 2015, we asked for their assistance in shaping the program. Thanks to their help, French Toast will work with 10 schools in the 2016-17 school year with the hope of adding 5-10 schools each school year,” Buesing says.

“We could have never imagined that the partnership would flourish into the program we have today. Together, we hope this program builds a foundation for each student’s future by teaching them how being present in school will lead to success in their future as well,” Buesing adds.

Find out more about French Toast on its website

To encourage students to attend & participate in school during these exceptionally challenging times, educators @EKCSCougars worked with youth & the community on a school-wide incentive program. On our blog: https://t.co/ohdLo0eKrH #SchoolEveryDay